Forfar Farmington goalscorer Amy Gallacher was delighted to open her account for the season but would have preferred all three points after their 3-1 defeat to Spartans.

Gallacher equalised shortly before a controversial red card for Robyn Smith ruined any chance the side had of winning the game, leaving them to battle for over an hour with ten players.

The attacker felt the sending off changed the game as Forfar seemed to be getting on top of Spartans until the incident.

“The result was very disappointing; I think the sending off changed the game. If it was 11 against 11 I’m confident we would have gotten the three points. We just need to keep digging in and we will soon get the result we want.”

Gallacher missed a great chance minutes before her goal and she was relieved to have made amends for her earlier miss. She said: “I’m very happy to have scored, I missed one not long before that I should have scored so thankfully I made up for it. I am just gutted we didn’t get a result in the end.”

The side now face a four week break until their next home game but will entertain Hibernian this Sunday in the quarter finals of the Scottish Women’s Premier League Cup. Gallacher reckons that if things start to go in Forfar’s favour, they can build on it and eventually get a deserved three points in the league.

She said: “It will be a good test next weekend against Hibs but there’s nothing to stop us getting a result. We have played well in our opening two league games, certain things just haven’t been going our way. I think if we get a good couple of weeks training in we should soon get the three points we deserve and kick on from there.”

With numerous new signings joining Forfar over the close season, Gallacher has had to fight for her place in the team but the highly talented attacker, who now has 18 goals in 44 games for the senior side, reckons it is good for the team as it means nobody can shy away from performing.

“I think the new players have fitted in really well and have improved us as a whole squad. It’s added experience and also numbers which means everyone has to fight for their place on match days.”

At the beginning of March, Gallacher was involved with the Scotland under 19 squad as they took on Czech Republic and Switzerland in Portugal. The 17 year old reckons it was helpful for her to build confidence and hopes she can keep her place when they play in the Elite Round of the UEFA European Women’s Under-19 Championship in April.

She said: “It was a really good experience and I gained a lot of confidence from it, playing against two top countries. I just hope I can continue that and perform well for both Forfar and Scotland if I get the chance.”

Following the interview was conducted, it was announced that Amy was named in the Scotland squad to head to Portugal for the Elite Round of the U19 European Championship.

Despite a fantastic second half effort, Forfar Farmington were defeated 3-1 on Sunday by Spartans after playing over an hour with ten players.

Alana Marshall put the hosts ahead with a debatable penalty and Amy Gallacher grabbed a quickfire equaliser before Robyn Smith was sent off for an alleged kick. Mark Nisbet’s side defended well in the second half but Mariel Kaney and Katie Reilly ensured the three points stayed at Ainslie Park.

Nisbet made two changes from the side that lost to Celtic the week before, Tori Sousa and Lindsey Dunbar dropping to the bench with Gemma Collier and Holly Napier replacing them.

Farmington had the first chance of the game in the 7th minute when Louise Magilton fired weakly at Eartha Cummings.

Spartans had a good chance to take the lead nine minutes later when Trish McLaughlin found herself inside the box but Fiona McNicoll denied her and it was eventually cleared. The resulting counter attack saw Amy Gallacher set up Napier; the midfielder’s effort deflected into the arms of the keeper.

In the 19th minute Gallacher had an opportunity of her own but she could only fire just wide.

The hosts opened the scoring two minutes later after Robyn Smith was adjudged to have fouled an attacker inside the box and Alana Marshall stepped up to fire the penalty home.

Four minutes after going behind Farmington were level; Amy Gallacher raced onto a loose ball after Bobbie Beveridge was slow in reacting and the Scotland U19 winger made her way into the box before coolly slotting past Eartha Cummings.

In the 27th minute, Forfar were dealt a massive blow. The referee had given Farmington a free kick in front of their dugout but the linesman alleged that Smith had a kick at a player off the ball. After consulting him, the referee sent Smith off, much to the surprise of the players of both sides, management and many of the supporters in attendance.

Farmington were forced to defend time and time again in the second half and did so impressively until the 60th minute when Mariel Kaney forced the ball home following a goalmouth scramble.

Ten minutes later Spartans sealed the win when their captain Katie Reilly lashed the ball home after latching on to a through ball from Kaney.

Substitute Lindsey Dunbar had a chance to make it an interesting injury time when Kayleigh Noble’s cross was laid off for her by Sousa, her shot pushed away by a scrambling Cummings.

The side now have a break from league action when they entertain Hibernian next Sunday at Station Park in the Scottish Women’s Premier League Cup Quarter Final. 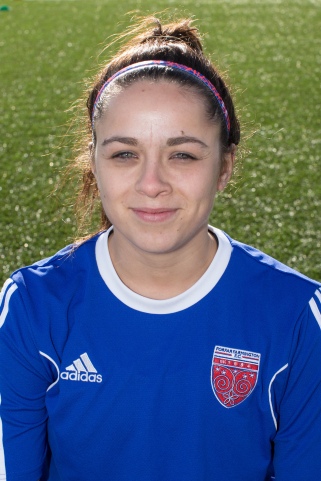 Megan McCarthy was pleased that Forfar Farmington overcame a potential banana skin in their League Cup win over Hearts on Sunday.

The 23 year old defender joined the club in December from Inverness City and grabbed the second goal in the 3-0 victory while playing as a striker.

Speaking after the game, the goalscorer reckons the side have what it takes to prove those who have written them off as relegation candidates already.

The game was played on a surface plagued with problems due to the recent weather and both teams had to adapt to it, with McCarthy pleased at how well Forfar did.

She said: “I thought that it was a tricky game considering the pitch we were playing on; we are not used to that kind of surface but none the less both teams had to play on it so it would have been difficult for both of us.”

“We had some nice passages of play and I thought defensively we played very well the girls at the back had a great game. I’m excited to play against Hibs in the next round. I’m also chuffed I got a goal on my debut and hopefully I can get a few more for the club.”

McCarthy has had a spell previously at Forfar in 2012 and after cutting it short to return to Inverness again she returned to join previous City teammates Kirsty Deans and Julia Scott which she claims made the decision easier. “Forfar have a really good set up which impressed me. From being at the club before I knew how much commitment you get from everyone from the coaches to the players. Two of my old team mates were joining at the same time too which helped made the decision easier.”

“From playing against Forfar previously I was impressed by their shape and their fight. It was obvious they had practiced drills and the players knew what to do and where to be at all times, they were difficult to defend against.” 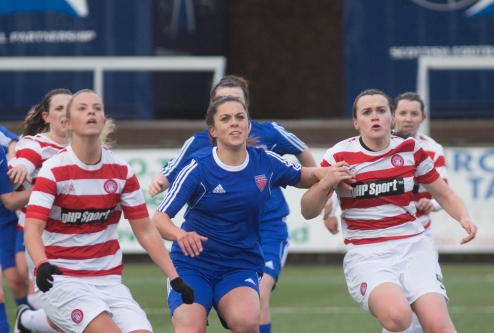 With the league season due to start this Sunday away to Celtic, McCarthy believes that Mark Nisbet’s side are more than capable of shocking a few critics of the side, commenting “I think this year we have the potential to surprise a few clubs. We have a lot of good players to choose from each week and you have to fight for your place in the team so all the girls will be giving it their all. I believe we have had a good pre season and the team is positive about the league.”

“I hope that we can finish well in the table at the end of the year, we have discussed where we want to be so I hope that we make that happen. As for myself, I would like be to be in the starting 11 for games, there are a lot of talented players at the club wanting to play in the same positions so I will just have to work hard to keep my place.”

Forfar Farmington opened their competitive season with a 3-0 victory over Hearts on Sunday that sent them into the quarter finals of the Scottish Women’s Premier League Cup.

Goals from Derrian Gollan and Megan McCarthy had the side at half time before Tori Sousa glanced home the third shortly after the restart.

The result does mean that they advance to the quarter finals where they will face last season’s runners up Hibernian on March 27th at Station Park.

Midfielder Kirsty Deans made her debut for the team while Robyn Smith, Julia Scott and Megan McCarthy were making their debut in this spell at Farmington.

Tori Sousa was first to threaten after a quiet opening period; firing over from long range.

Forfar took the lead on the quarter hour mark when Scott’s corner wasn’t cleared properly and when Jade McLaren crossed into the box again Derrian Gollan was on hand to bundle the ball home for her first senior goal.

Just three minutes later McLaren almost had a goal of her own but saw the ball cleared off the line by a defender.

In the 31st minute Deans went close with a thunderous long range effort however the keeper managed to regain her composure and collect the ball after fumbling it.

Ashley Carse almost had an opportunity for the hosts seven minutes from half time when she was sent clear but when she attempted to round Fiona McNicoll, the keeper managed to get a hand to push the ball away.

The lead was doubled with the last kick of the first half; a cross into the box was knocked down by Gollan and Megan McCarthy was on hand to sweep the ball home.

McCarthy almost had a second within thirty seconds of the restart when she forced a save from Megan Steel but it was Tori Sousa who got her name on the scoresheet next in the 51st minute. McCarthy sent Robyn Smith on her way down the right wing before sending a cross in that Sousa rose to glance home.

Brogan Anderson forced a good save from McNicoll with a threatening lob as Hearts looked for some way back into the game while at the other end McLaren was inches away from connecting with a teasing Napier free kick.

Just after the hour mark Louise Magilton did well to set up Smith however her half volley flew into the side netting.

Rachel Walkingshaw was unlucky not to score a consolation for the SWPL2 side in the 64th minute when her effort from the edge of the box rattled off the crossbar. Holly Napier was next to find the woodwork seven minutes later, lobbing the keeper from 25 yards but she could only watch as the ball came off the bar before being cleared.

Smith nodded wide from a Napier cross before Magilton struck her effort straight at Steel in the 74th minute.

Forfar saw out the final stages of the game with ease and despite Napier and Magilton having shots they couldn’t add to their tally.

The side now look to next week when they begin their league schedule with a trip to East Kilbride to face Celtic.